While you probably could have guessed which brand came out on top, do you have any idea which automotive manufacturer posted the worst numbers? We’ll get to that shortly, but for now, it’s time to dig into the US Environmental Protection Agency’s 2022 Automotive Trends Report. According to the EPA, Tesla posted the best numbers across the board for the 2021 model year, and that’s been the case for many years.

Tesla had the lowest emissions, as well as the highest fuel economy, and no other manufacturers or brands even come close. However, there is at least some positive news. If we just look at individual vehicles rather than automakers’ entire lineups, there are some other fully electric models that fared quite well over the years, and many future EVs will do the same.

While the Tesla Model 3 topped the list for 2020 and 2021 the BMW i3 and Hyundai Ioniq have been leaders multiple times in the past, and the Lucid Air may get the honor for 2022.

As you can see, Stellantis has posted the lowest fuel economy numbers every year since 2012, and it’s expected to be at the bottom of the list again in 2022, with Tesla’s lineup staying at the top. Did you guess correctly?

Keep in mind that both Rivian and Lucid produce only EVs, along with Fisker and some other newly emerging brands. However, they don’t yet have full lineups of vehicles, and there’s little to no data from prior years.

In addition, some fully electric models from legacy automakers just came to market fairly recently, so they won’t be ranked in the report until next year. The listing of brands in the EPA’s 2022 Automotive Trends Report is as follows (they aren’t ranked, but rather, they’re in alphabetical order): 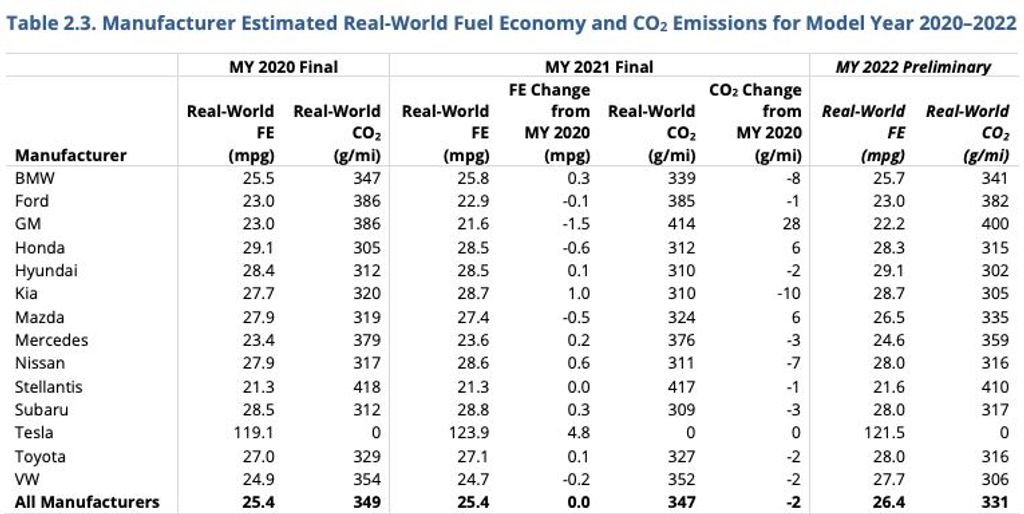 Sadly, the real-world efficiency for all manufacturers averages about 26 mpg for all three years shown. Meanwhile, the total real-world CO2 output is well above 300 grams per mile, though you can see that it’s gradually improving, albeit marginally.

Looking at Tesla’s numbers, it has the only triple-digit fuel economy, which is shown in MPGe (miles per gallon of gasoline equivalent). The brand comes in right around 120 MPGe for its lineup as a whole. That number is almost five times better than the average. When it comes to Tesla’s emissions, the report just shows a zero for all years, since the automaker’s EVs don’t produce any tailpipe emissions.

For those interested in diving deep, there’s a whole lot more to unpack in both the executive summary and the full report. We’ve included links to the PDFs below:

Tesla Brand Dropping As Elon Tilts At Woke Windmills. Who Would’ve Guessed It?