The ability to conveniently charge an EV away from home is a top concern for many EV owners. A 2022 survey of EV owners by Forbes indicates that 62 percent of respondents are so anxious about their EV range that travel plans have been affected. While “range anxiety” may be overblown, the need for an extensive and reliable external charging infrastructure is not.

Infrastructure terminology can itself be confusing. For clarity, bear in mind that a charging station is a specific physical location which has one or more charging posts. A charging post itself may have one or more ports, where each port can charge a single EV. Each post may have multiple types of service connectors to support different EV charging connector standards. And a port may supply varying power levels.

The more power delivered, the faster the EV charges. The charging times will vary by model and state of the EV battery. Ford says that a F-150 Lightning “using a 150 kW+ DC fast charger, the standard-range 98 kWh pack can charge from 15-80% in about 44 minutes,” while Hyundai says its IONIQ 5 EV using a 350 kW charger, “can charge from 10 percent to 80 percent in just 18 minutes.”

Finding a 350-kW charging port is not easy to do. As of this spring, 88 percent of the 46,000 EV public charging stations having some 115,000 plus charging ports that only support L2 charging, according to US News & World Report. Tesla is upgrading its 1,500 Supercharger stations in the US to 300 kW, as well as open charging to non-Tesla vehicles, but some 40 percent of DC fast chargers operate at only 50 kW currently.

Forecasts concerning how many chargers and the types needed vary greatly, depending on the assumptions about the number and types of EVs in operation in the US and elsewhere. For example, the International Council on Clean Transportationestimates that there will be 25 million EVs on the road in the US by 2030, and there will need to be 1.3 million workplace L2, 900,000 public Level 2, and 180,000 DC fast charging ports.

Most experts agree the number of chargers needed in the US within the decade is at least 20 times more than exist today.

The Edison Electric Instituteestimates that there will be 26 million EVs on the road, and it assumes that there will need to be 1.2 million L2 workplace, 2 million public L2 and 140,000 DC fast charging ports. On the other hand, if the US meets the Biden Administration’s goal of making half of all new vehicles sold in 2030 zero-emissions vehicles, including battery electric, plug-in hybrid electric, or fuel cell electric vehicle, i.e., 48 million EVs, there will need to be 553,000 L2 workplace, 675,000 public L2 and 533,000 DC fast charging ports according to McKinsey & Company.

Regardless of which estimates come closest to reflecting reality, most experts agree the number of chargers needed in the US within the decade is at least 20 times more than exist today. This means installing hundreds of charging ports every day for the next decade at least. Some countries, like Ireland, estimate it needs 50 times more fast charging ports than it has now, while Australia will need many times more that number given what it has in place currently.

A family waits in sweltering heat as their Tesla car charges on July 17, 2022 in Nephi, Utah. George Frey/Getty Images

Placement of chargers is critical. The estimates above assume most EV charging will be done at the home. The US Department of Energy has long held that some 80 percent of EV charging will be done at an EV owner’s residence in the US. Other studies indicate that this proportion may top out closer to 60 percent, with only about half of US vehicles having reliable off-street parking at an owned residence. In addition, according to the National Association of Home Builders, some 31.4 percent (or 44 million residences) households live in multi-family dwellings (i.e., apartment buildings, condominiums, townhouses and mixed-use developments) who may not have convenient charging options. Eliminating “charging deserts” in rural areas and cities, especially in low-income minority areas, is a priority that will need to be addressed. At the very least, tens of millions of L2 EV chargers will need to be installed across all types of residences in the next decade if EVs are going to scale in the US, which will test the reliability of local electrical distribution systems.

Multiple initiatives are underway to provide more public EV charging. GM, EV charging company EVgo, and Pilot and Flying J travel centers have partnered to install 3,250 DC fast chargers across the country by 2025. GM is going to provide 40,000 L2 chargers at its dealerships across the US and Canada as well. A newly formed National Electric Highway Coalition (NEHC), a collaboration among some 50 utilities in the US, has pledged to install thousands of fast chargers along US highways by the end of 2023.

The Biden Administration has also committed to providing $5 billion through the federal Infrastructure, Investment and Jobs Act (IIJA) to the states to help them create privately owned EV charging network of up to 125,000 charging stations with a minimum of 4 DC fast chargers located approximately every fifty miles near, but not on, US interstate highways. The Act will pay up to 80 percent of the station and help support the business for five years. Under IIJA funding rules, only non-proprietary charging ports can be supported, information about wait times and charging speeds must be publicly available, and the charging infrastructure must also be designed to support future technology advances such as autonomous vehicles and electric semi-trailer trucks.

Getting zoning approval, permits and dealing with the local utilities, i.e., the “soft costs,” can quickly increase the cost and time needed to build a station.

Furthermore, IIJA funding for charging stations is being disbursed over five years. With most construction starting next year, it will be 2028 before the interstate charging system is in complete operation. It may take even longer, however, as another federal IIJA funding requirement is that the EV charging devices themselves must be American built. With few EV charging suppliers meeting this requirement, states are already warning of possible delays as all compete for the same resources. EV station software must also be secure, especially that they are now becoming the target of hackers.

Another IIJA requirement is that the charging stations must be well-maintained. Broken or malfunctioning EV charging posts are becoming a major concern, except at Tesla’s Superchargers. A study (pdf) in California found that in checking out 657 EV service connectors at 181 public DF fast charging stations in the San Francisco Bay area that over 20 percent of them were “non-functioning.” A recent J.D. Power survey supports the study, showing EV owners increasingly frustrated by a “beleaguered public vehicle charging infrastructure… (where) EV owners continue to be faced with charging station equipment that is inoperable.”

Ford is so concerned, that it is taking upon itself to check out EV stations, and if it finds non-functional service connectors, it will diagnose the issue and tell the station owner. If the problem is not corrected, Ford’s EV station location software will remove the station from its charging recommendations.

Building an EV station is not easy, either. Getting zoning approval, permits and dealing with the local utilities, i.e., the “soft costs,” can quickly increase the cost and time needed to build a station. Seven years ago, California passed a state law streamlining EV station permitting. However, the law is widely ignored by local jurisdictions, which is why the state is next to last in time to get a permit (only New Jersey, another declared EV friendly state, is slower). Even someone as experienced as Tesla has problems. Rohan Patel, Senior Global Director, Public Policy and Business Development at Tesla, told a National Academy EV workshop last year that as Tesla was building a ten-million square foot gigafactory in Texas, because of permitting and utility interconnection issues, “We are going to build that thing faster than we can build a Supercharger (station) just down the road.”

Charging stations to support future electric tractor trailers will be a major challenge, both for supporting warehouse and distribution centers as well as on the road. It is estimated that the power requirement of an EV-friendly highway plaza and truck stop will be equivalent to a small town, according to a recent study by the US utility company National Grid. 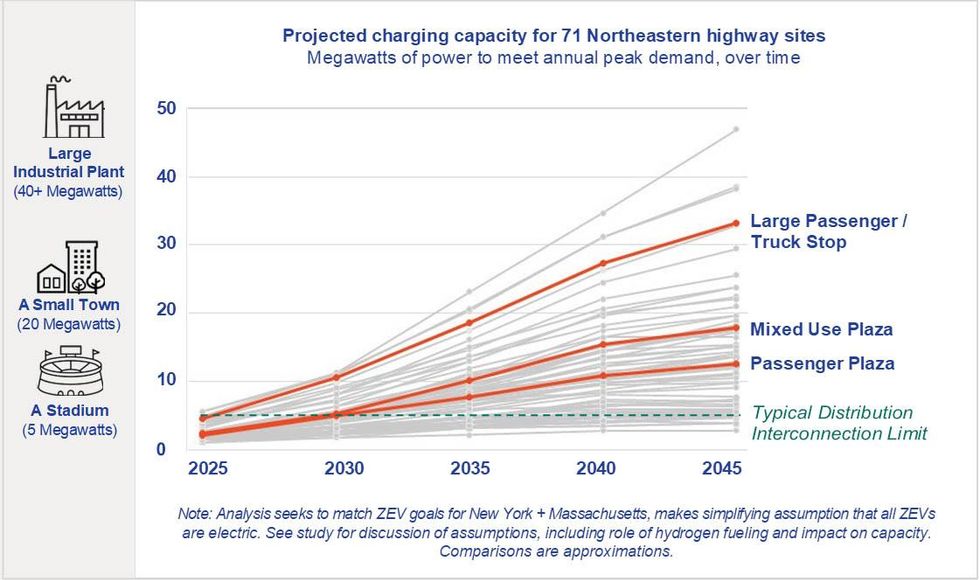 The study looked into future EV charging station requirements across New York and Massachusetts to understand how they will potentially affect its grid infrastructure. It found that typical highway EV charging sites will need over twenty fast chargers by 2030 to support passenger EVs, which will start reaching the max distribution interconnection load limit. After then, many charging sites will need to connect into the high-voltage transmission system as well as see electrical substation upgrades.

The National Grid study states that some existing and planned highway plaza and truck sites will need to start the upgrading process now, before the need exists. The study notes, “While charger installation can be completed in a matter of months, larger transmission interconnections and upgrades can take as long as eight years to construct.” Furthermore, it states its results “show that the minimum site configuration required by the NEVI program formula funding guidance (four 150-kW chargers) will be surpassed by expected demand across many highway sites in the near future.” This implies that many of the EV charging sites under the IIJA funding will be undersized almost from the beginning.

The National Grid study additionally notes that it is “fortunate” that many of the Massachusetts and New York highways and high-voltage transmission lines parallel one another, making it easier to support the future electrical load requirements. Other states may not be so lucky.

As EV charging stations increase, hitting a “Goldilocks” number of them will be important. If too many are built too soon, many stations will not be maintained, upgraded, or they will be closed, for the lack of profitability. This is happening in Japan. Too few, and public EV frustration will grow, possibly slowing EV adoption. A wildcard is whether economically feasible EV battery range breakthroughs occur, which could end up dampening the demand for public EV charging stations.

In the next article in the series, we will begin looking into the social challenges in transitioning to EVs at scale.

Semi Is First But Not The Last

The New Element Bondi Wants To Reinvent The Classic E-Scooter